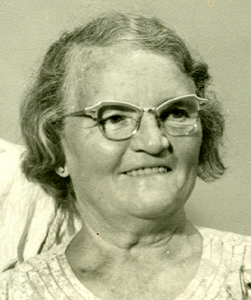 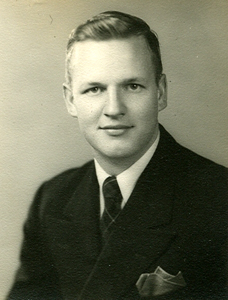 William Hugh Jones was born on 10 July 1918 at Poultney, Rutland Co., VT.1 He was the son of William W. Jones and Margaret (????)1 William Hugh Jones married Rhoda Roxanna Lyons, daughter of Ball LaFayette Lyons and Emilie Anna Kittel, in June 1940.1,2 William Hugh Jones died on 25 October 2010 at Media, Delaware Co., PA, at age 92.2
From an obituary in "The Daily Times": William H. Jones, 92. Died Monday, October 25, 2010, at Granite Farms Estates in Media, PA, which has been his residence for the past eleven years. Mr. Jones was born July 10, 1918, in Poultney, VT, the youngest child, and only son, of Margaret and William W. Jones. He was educated at the Troy Conference Academy at Green Mountain College and at Castleton Normal School where he met his wife. Mr. Jones married Rhoda Lyons of Bennington, VT, in June of 1940. After teaching for one year in the Orwell, VT, school system, Mr. Jones and his family moved in 1941 to Springfield, VT, where he was employed by the Lovejoy Tool Company. In 1947 Mr. Jones moved to Norwood, PA, where he started the W. H. Jones Company, Inc. as a manufacturers' representative in the machine tool industry. In 1953 he and his family moved to Wallingford, PA, where he lived until after he retired in 1985. In later years Bill and his wife, Rhoda, divided their time between their home in Vero Beach, FL and the family summer camp on Lake St. Catherine in Wells, VT.
Mr. Jones was predeceased by his parents, 3 sisters, and his wife Rhoda. Survivors: His sister Eirlys (age 99), and his 2 children Reg Jones of Bennington, VT and Virginia Heilala and her husband, Don of Glen Mills, PA. Also surviving are 2 grandchildren Christine Burk and her husband Sam and Wayne Heilala and his wife Alexis; as well as 3 great-grandchildren: Lexi, Sammy, and Owen Burk; and former daughter-in-law Nancy Jones of Medford, MA.2

Betty Magwire is the daughter of Charles Eugene Magwire and Ruth Winifred Pulsipher.1

Virginia Jones is the daughter of William Hugh Jones and Rhoda Roxanna Lyons.1

Wayne Heilala is the son of Don Heilala and Virginia Jones.1

Shirley Howe is the daughter of Crosby Orlando Howe and Mildred Elfreda Lyons.1