Child of Willis Hart and Ann A. Johnson

Child of Ann A. Johnson and Willis Hart

Children of Mary A. P. Ball and George R. Mead 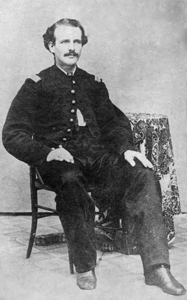 Walter Eaton Mellish
b. 1841 Boston MA
d. 1920
Walter Eaton Mellish was born on 16 June 1841 at Boston, Suffolk Co., MA.1 He was the son of William Mellish and Hannah Pope.1 Walter Eaton Mellish married Elizabeth Ella Ball, daughter of Henry W. Ball and Mary E. Dunham, on 8 January 1867 at Bellows Falls, Windham Co., VT.2 Walter Eaton Mellish died on 12 June 1920 at age 78.1 He was buried at Center Cemetery, Shirley, Middlesex Co., MA.3
Walter Mellish enlisted as a Private into Company I under the command of Capt. Carlton. He was subsequently promoted to Corporal, Seargeant, and when the regiment went to Fort Fisher in January 1865 to 2nd Lieutenant. He finished his service with the rank of 1st Lieutenant.1      Photo courtesy of Dorothy Brousseau. 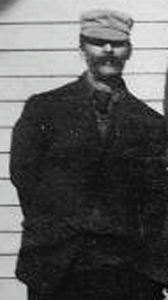 Edward Walter Mellish
b. 1869 Charlestown NH
d. 1927 Shirley MA
Edward Walter Mellish was born on 22 May 1869 at Charlestown, Sullivan Co., NH.3,4,2 He was the son of Walter Eaton Mellish and Elizabeth Ella Ball.1 Edward Walter Mellish married May Frances Farnsworth, daughter of Melzar Vinal Farnsworth and Emma Frances Lothrop, on 26 November 1894 at East Boston, Suffolk Co., MA.4 Edward Walter Mellish died in 1927 at Shirley, Middlesex Co., MA.2,5 He was buried at Center Cemetery, Shirley, Middlesex Co., MA.5
From an obiturary: Edward W. Mellish passed away at his home on last Saturday after an illness of five years. He was born in Charleston, N.H., May 22, 1869, the son of Walter and Elizabeth (Ball) Mellish, and went ot Shirley with his parents when a young man. He later went to Boston, learning the painter's trade and worked there for several years. Upon returning from Boston he entered the employ of the Edwin H. Sampson Leatherboard Co., where he remained for several years, then returning to his trade, working for the late Samuel Farnsworth in Ayer. After a few years he went to work for the Hollingsworth & Vose Co., where he stayed about twenty-eight years, working on repairs and having charge of the painting.
He was married in 1894 to May F. Farnsworth, of Woods Village, and started housekeeping in the house known as the Kemp house, later moving to this village. Mr. Mellish was connected with the Squannacook fire company, serving as clerk for many years, filling all positions as a fireman to the full satisfaction of the company. he was also a member of the George V. Barrell Camp, Sons of Union Veterans of the Civil War.
The deceased was widely known as a baseball player of unusual ability, and was connected with the local team as long as he was able to play. He was manager of the West Groton A.A. for several seasons. He had a genial disposition, makeing friends wherever he went, and will be greatly missed in the village.
Besides his widow he leaves two daughters, Miss Marion, of Allston, and Miss Ruth, of this village; two sisters, Mrs. Stuart Woodland, of Cambridge, and Mrs. Herbert Perrs, of Parsonfield, Me., and an uncle, Frank P. Ball, of Boston.1      Photo courtesy of Dorothy Brousseau.

Children of Edward Walter Mellish and May Frances Farnsworth