Oscar B. Benedict was born circa 1844 at NJ.1 He was the son of Terah Benedict and Julia Camp Ball.1

James P. Benedict was born circa 1848 at NJ.1 He was the son of Terah Benedict and Julia Camp Ball.1

Lucius Lorenzo Ball
b. 1850 Greensburg OH
d. 1932 Muncie IN
Lucius Lorenzo Ball was born on 29 March 1850 at Greensburg, Trumbull Co., OH.1 He was the son of Lucius Styles Ball and Maria Polly Bingham.1 Lucius Lorenzo Ball married Sarah Rogers, daughter of John Rogers, on 1 June 1893 at Bay City, Bay Co., MI.1 Lucius Lorenzo Ball died on 22 July 1932 at Muncie, Delaware Co., IN, at age 82.1 He was buried at Beech Grove Cemetery, Muncie, Delaware Co., IN.2
From an obituary: Dr. Lucius L. Ball, 82, the eldest of the Ball Brothers, Muncie philanthropists, died at 12:20 o'clock Tuesday morning at his home on Minnetrista Boulevard, following an extended illness. A resident of Muncie for more than 30 years, he gained many friendships here and was loved by all who knew him. His untimely death came as a distinct shock to the many friends of the community. Dr. Ball was born in Greensburg, Trumbull County, Ohio, on March 29 1850, his father, Lucius Stiles Ball, born in Ascot, Canada, and his mother, Maria P. (Bingham) Ball born in Stansted, Canada. When he was 12 years old, his father and mother and family moved to New York state, locating near Buffalo, and two years later they moved to Canandaigua, New York, where they remained for ten years. The children attended the public schools and completed their education in Canandaigua Academy. The father died in Canandaigua on January 25, 1878, and shortly after his death the mother and five sons moved to Buffalo, N.Y. where Lucius Ball entered the medical department of the University of Buffalo and was graduated in 1889.
For three years thereafter, Dr. Ball served as house physician in the Adrian Hospital in Pennsylvania and then began the practice of medicine in Buffalo. In 1894, he rejoined his brothers in Muncie. The year before he married Sarah Rogers, daughter of Mr. and Mrs. John Rogers of Buffalo. Although retired from active practice of his profession for many years, Dr. Ball kept abreast of new discoveries in medical science and in touch with his profession and he held membership relations with the state and national medical societies, the American Medical Association, the Muncie Academy of Medicine, the Delaware-Blackford Medical Society; and with the Medical Section of the American Life Insurance Convention. Dr. Ball was a member of Muncie Lodge No. 433, F and AM, Muncie Commandery No. 18, Knights of Templar, and a thirty-second degree Mason. He was also a member of St. John's Universalist Church.
Those surviving him are the widow, Sarah, at home; two brothers, Frank C. and George A. Ball, prominent Muncie manufacturers; one daughter, Mrs. Leland Robinson of Bronxville N.Y; and one grandson, Lucius Ashley Robinson of Bronxville. Two brothers, William C. Ball and Edmund B. Ball, died in recent years. Dr. Ball practiced his profession in Muncie until about 12 years ago, maintaining offices in the Wysor Block at the time of his retirement. He was also affiliated with his brothers in the Ball Brothers Glass Manufacturing Company until a few years ago. He was active in the local medical societies and he was widely acquainted in Muncie and vicinity. He was also active in the affairs of the Masonic Lodge.3      Left photo courtesy of "TriciaB5581"; right photo courtesy of Ball State University.4,5 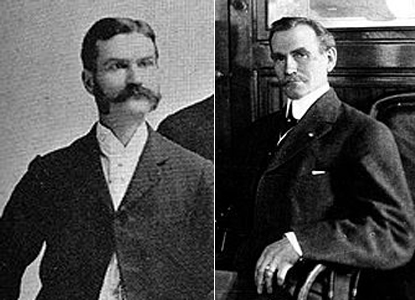 William Charles Ball
b. 1852 Greensburg OH
d. 1921 Muncie IN
William Charles Ball was born on 13 August 1852 at Greensburg, Trumbull Co., OH.1 He was the son of Lucius Styles Ball and Maria Polly Bingham.1 William Charles Ball married Emma Cora Wood, daughter of John D. Wood and Caroline Matilda Farrar, on 22 December 1890 at Buffalo, Erie Co., NY.1 William Charles Ball died on 20 April 1921 at Muncie, Delaware Co., IN, at age 68.1 He was buried at Beech Grove Cemetery, Muncie, Delaware Co., IN.2
From an obituary: William Charles Ball, 69, secretary of the Ball Brothers Glass Manufacturing Company, prominent Muncie resident, and widely known throughout this and other states, died at 3:15 o'clock yesterday afternoon at the family home in Minnetrista Boulevard, following a week's illness of pneumonia. Mr. Ball was born in Greensburg, Ohio, August 13, 1852, the third of eight children born to Lucius Syles and Maria P. Ball. In 1867 the family moved to Canandaigua County, N.Y., where Mr. Ball attended the public schools and the Canandaigua Academy. After the death of his father, the family moved to Buffalo, N.Y. where the five brothers began their industrial career in a manufacturing business. in 1887 following the discovery of natural gas in Muncie, Mr. Ball's four brothers moved to this city and established the foundation of their present business, although William remained in Buffalo in charge of the factory in that city. A few years later, he joined his brothers in Muncie and had resided here since that time.
In December 1890. Mr. Ball was united in marriage to Miss Emma C. Wood, who survives him. Besides the widow, one son, William H. Ball, a daughter-in-law, Mrs. W. H. Ball, granddaughter, Lucina Ball; four brothers, Frank C. Ball, George A. Ball, Lucius L. Ball, Edmund B. Ball, and one sister, Frances A. Mauck, wife of J.W. Mauck, president of Hillsdale College, Mich., survive. Through all his residence in this city, Mr. Ball was active in his personal business and in civic welfare. Everything that was worthy appealed to him and received his sympathy and support. The cause of human brotherhood made a strong appeal to him and he identified himself closely with religious, civic and fraternal orders. He was prominent in Masonic circles and for many years was an active member of the Muncie Commandery No. 18, Knights Templar, all offices of which he had served with honor. At the time of his death he was a past eminent commander of Muncie Commandery, and a thirty-second degree Scottish Rite Mason.
Mr. Ball had been a member and active worker in St. Johns Universalist Church from the time of his residence in Muncie. He had recently succeeded his brother, F.C. Ball as superintendent of the Sunday school. In the Chamber of Commerce and the Exchange Club, Mr. Ball manifested his deep interest in the welfare and prosperity of his city. He was a man of great refinement and aesthetic taste. Everything that was beautiful in art, literature, music and life awakened a response in his heart. His mind was richly stored with rare gems of both prose and poetry, with which he delighted and inspired his friends and associates. He found the world a good and beautiful place to live in and endeavored to show his appreciation by contributing of his own life to everything that was good, noble, beautiful and true. Evidence of his generosity will long remain in Muncie as a memorial to the man. In his office, his home, his church, in lodge and in all his varied capacities and activities, he was ever a lovable and dependable man. His death is distinctly a community loss.2      Left photo courtesy of "TriciaB5581"; right photo courtesy of Ball State University.3,4 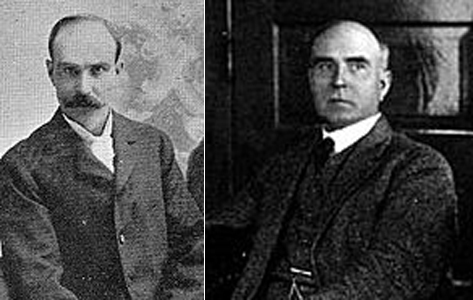 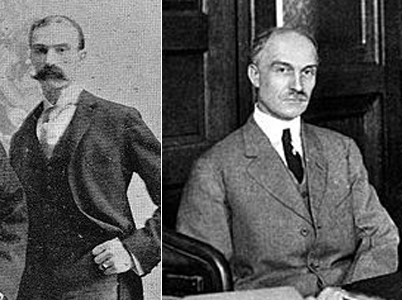 Elizabeth Ball was born on 16 December 1897 at Muncie, Delaware Co., IN.1 She was the daughter of George Alexander Ball and Frances Emily Woodworth.1

Leland Ball Robinson was born on 11 January 1927 at Manhattan, New York Co., NY.1,2 He was the son of Leleand Rex Robinson and Helen Ball.1 Leland Ball Robinson died on 2 March 1931 at NY at age 4.2 He was buried at Beech Grove Cemetery, Muncie, Delaware Co., IN.2

Lucius Ashley Robinson is the son of Leleand Rex Robinson and Helen Ball.1

Sarah Rogers Robinson is the daughter of Leleand Rex Robinson and Helen Ball.1

Lucina Ball was born on 21 August 1918 at Muncie, Delaware Co., IN.1 She was the daughter of William Hudson Ball and Agnes Marian Medsker.1 Lucina Ball married Edwin Breck Eckerson, son of Albert Bogert Eckerson and Mary Elizabeth Breck, on 5 June 1940 at Delaware Co., IN.2,3