Seth Stark Ball was born circa 1828 at Wyoming Co., PA; 26 Jan 1827 is given by some as his birth date, but this doesn't match any of the censuses.2 He was the son of Orville A. Ball and Mahala Shaw.2 Seth Stark Ball married Almira Catherine Wilsey, daughter of Matthew Wilsey and Mary Ball, circa 1850.3 Seth Stark Ball married Sarah Berfield Patterson on 9 December 1861 at Jackson Co., WI.4 Seth Stark Ball married Sarah Hellen Pierce on 6 January 1884 at Castlewood, Hamlin Co., Dakota Territory.5 Seth Stark Ball died on 6 April 1893 at Castlewood, Hamlin Co., SD.5
He left a will on 3 April 1893. "In the name of God, Amen, I, Seth Ball of Castlewood, in the county of Hamlin, and State of South Dakota, being of sound mind and memory, and considering the uncertainty of this frail and transitory life, do therefore make, ordain, publish and declare, this to be my last Will and Testament:
"First, I order and direct that my Executrix hereinafter named pay all my just debts and funeral expenses as soon after my decease as conveniently may be.
"Second, after the payment of such funeral expenses and debts, I give, devise and bequeath to my daughters Alice May Ball and Sarah Margaret Ball, and my sons William Orville Ball, Lewis Walter Ball, and Nelson Mathew Ball the sum of One Dollar each.
"Third, I give, devise and bequeath to my wife Sarah Hellen Ball, all the rest and residue of my property, goods and chattels of every kind and description.
"Fourth, I bequest and direct that my Executrix shall not be required to give any Bond or Undertaking.
"Lastly, I make, constitute and appoint my wife, Sarah Hellen Ball to be Executrix of this, my last Will and Testament, hereby revoking all former Wills by me made.
"IN WITNESS WHEREOF, I have hereunto subscribed my name and affixed my seal, the Third day of April, in the year of our Lord one thousand eight hundred ninety three. Seth Ball
"this Instrument was on the day of the date thereof signed, published and declared by the said testator Seth Ball to be his last Will and Testament, in the presence of us who at his request have subscribed our names thereto as witnesses, in his presence and in the presence of each other. H. H. Curtis, residing at Castlewood, SD; A. F. Paulson, residing at Castlewood, SD."5 The Petition for Letters Testamentary dated an unknown date , states that Seth Ball died on the 6th day of April, 1893 while a resident of Hamlin County, Douth Dakota.5

Children of Lucy A. Ball and George K. Beebe

Children of Byron L. Ball and Emma A. Billings

James Ball was born on 3 October 1844 at Wyoming Co., PA; not in the 1850 census, so likely died young.1 He was the son of Orville A. Ball and Mahala Shaw.1
Comment by DGB: I suspect that this is the same person as Jerome. End of comment.

Virginia Dixon was born circa 1867 at PA.1 She was the daughter of Irvin Dixon and Huldah Ball.1 Virginia Dixon married Wallace Long.2
Her married name was Long.2

Eva Dixon was born circa 1873 at Wyoming Co., PA.1 She was the daughter of Irvin Dixon and Huldah Ball.1 Eva Dixon married Harry Garren.2
Her married name was Garren.2

Sadie Dixon was born circa 1880 at Wyoming Co., PA.1 She was the daughter of Irvin Dixon and Huldah Ball.1 Sadie Dixon died circa 1906.2

Harry Dixon was born in July 1890 at Wyoming Co., PA.2 He was the son of Irvin Dixon and Huldah Ball.1

Caleb Billings was born circa 1825 at PA.2 He was the son of Jasper Billings and Jane Day. Caleb Billings married Polina Ball, daughter of Orville A. Ball and Mahala Shaw, on 24 February 1845 at Tunkhannock, Wyoming Co., PA.3 Caleb Billings died on 6 June 1883.4 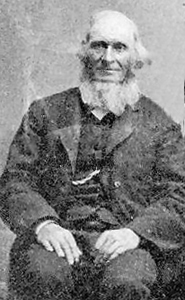 Children of George K. Beebe and Lucy A. Ball